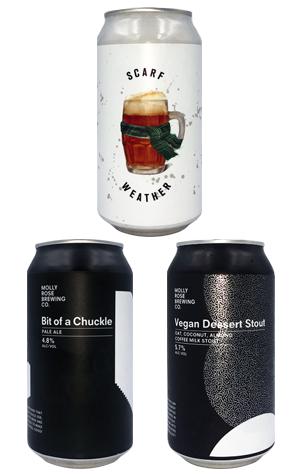 There's a fair bit of humour running through this trio of limited releases from Collingwood-based Molly Rose, or two of the three, at least. The naming of A Bit Of A Chuckle makes that much clear, with the beer a pale ale that's something of a rollercoaster, albeit delivering a ride that's rather more enjoyable than the one everyone in the beer industry has been strapped into over the past couple of months. The name refers to the daft amount of hops – Cascade, Citra, Mosaic, Chinook and Simcoe – thrown at a lower ABV version of their Chuckle pale.

In my case, once the carriage reached the top of the first tower, I was plunged into a pine forest, skimming its floor before being shot through a wall of deep citrus (maybe for the sake of this metaphor it's some form of log flume...) only to be twisted and turned through candied fruits and sweet blackcurrant. It's as if the Rolodex of big US hops – old and new – has been emptied into a fermenter as you travel back and forth, up and down through a joy ride in which even the expansive bitterness (presumably the moment you're hoicked from the carriage) is full of flavour.

Winter Scarf, another Blackhearts & Sparrows collab, holds back little too, although here you're transported to the aisle of a Northern European Christmas market where bakers are hawking their festive wares. Perfumed, spiced cakes laced with ginger and cinnamon sit next to slices heavy with orange rind and drenched in lemon jus, while the old woman wrapped in layers of wool suggests a herbal tea to cleanse the palate once you've finished your sampling.

As for Vegan Dessert Stout, it's either intended for or a parody of those who've forsaken dairy and can't decide which of the alternatives on the market is, on balance, best for the planet. While there's no soy here, there are almonds, oats and coconuts. Not to mention Proud Mary coffee and a shot of nitro which ensures that, with a fierce shake of the can and aggressive pour, you get an ultra smooth and creamy texture with a pillowy head on top. More deep brown than black, there's creamed coffee, milk chocolate, a dusting of cacao, coconut, hints of vanilla and a little nuttiness at play, while Nic Sandery's tendency towards the dry (in humour as well as beers) prevents it finishing as sweet as many a milk stout.

And via their online store