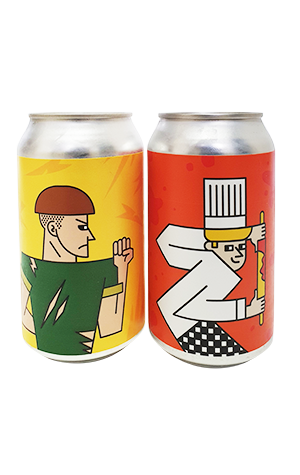 This pair of releases from CoConspirators happen to be two of the brewing company’s strongest and both feel like fitting subjects on Melbourne’s coldest April day in decades. First up is The Fall Guy, an autumnal double hazy IPA hopped with El Dorado, Mosaic, Azacca and Idaho 7. In many ways, the beer is familiar territory for the brewing company, which has attracted plenty of fans for The Matriarch NEIPA, with The Fall Guy taking that template and stepping into bigger and boozier territory. I found it to be loaded heavily with orange, mango and peach and, while the booze did offer a bit of warmth, it’s matched with a thick and creamy mouthfeel.

Next up and a further step into wintry territory is The Pastry Chef, a beer destined for GABS before the festival was postponed. Like their chocolate milk stout The Apprentice, this salted caramel slice stout makes use of chocolate from Brunswick’s Ratio Cocoa Roasters and on first sip comes across almost like a chocolate mudcake. You're then met by a swirl of caramel and the salt which, unlike plenty of modern gose style beers, really makes itself known and, in doing so, helps balance the beer's boozy sweetness.