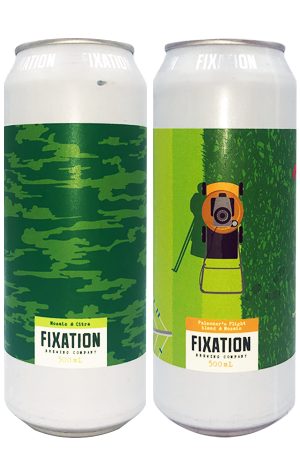 In the space of a few weeks, the team at Fixation's Incubator in Collingwood have gone from wondering what the hell they're going to do with tanks and kegs full of IPA (including some from other brewers sent to their ResinFest just before venues closed) to filling as many growlers in a month as they'd previously done in a year and repackaging a keg run of Little Ray into cans. And now they've decided to speed up their short run can program too, with four 500ml IPAs set to land in little more than a week.

The first pair features Danker Things, a 7 percent hazy that goes beyond the brief of its title, with plenty of fruity tropical aromas and flavours unfurling from the smooth, barely bitter liquid to keep the dankness company. A vibrant expression of Mosaic and Citra from start to finish.

In its own way, the half-the-size Half Cut "mid IPA" is pretty much the same thing. Hazy and yellow, the mid-strength might by light and refreshing in nature but still serves up a platter laden with rockmelon and lemon citrus and the sort of cleansing bitterness that should ensure it leaves your glass in half the time.