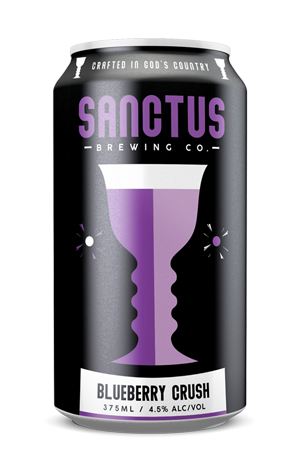 Not many breweries lock in a berry sour as a core range beer. The team at Sanctus Brewing didn’t just commit to Blueberry Crush, but they did so from the day they opened. Since from the beginning they wanted to brew beers specific to their location in the Northern Rivers, it was a no-brainer to make the most of their excellent local suppliers.

While this beer is named for one berry, you’re actually getting three - local blueberries, raspberries and blackberries all contribute to the vibrant colours and flavours here. A candy pink head and the reddy-pink of pomegranate juice whet the appetite, with the waft of berries and bready notes following closely behind; the combination of aromas evokes jam donuts and blueberry bagels.

The berry flavours are far from overpowering, but they’re certainly not shy either - when you start drinking, it’s hard not to be reminded of sparkling grape juice or creaming soda. Never fear, though: there's enough tartness to remind you you’re drinking a sour beer.

This beer is about as close a “a beer for anyone” as they come. At the Sanctus taproom, the bar staff initially thought the non-beer-drinking customers be ones most enamoured with Blueberry Crush, but the tradies having a few beers at knock-off turned out the ones who crush the most of the ruby-hued brew.