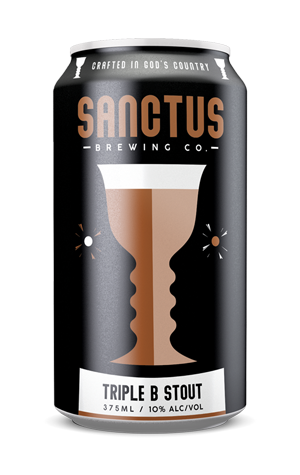 Taste is subjective. I get that. I know my preferences aren’t everyone’s preferences. But I’m gonna go ahead and call it: when Sanctus Brewing described beer as a "gift from the gods" and put a picture of the Holy Grail as their logo, they had this imperial stout in mind. After I took my first sip, I half expected a 900-year-old knight to tell me I had chosen… wisely.

Drinking Triple B Stout (big, bold, beautiful!) is an exercise in luxury. The dense head is the colour of milk chocolate, and clings to the side of the glass with the persistence of chocolate fondue.

Chocolate and coffee meld together with the creamy vanilla and boozy undertone of Baileys. But while there’s a definite sweetness to this syrupy concoction, it’s not sugary or cloying in the way some liqueurs can get. Rather, the sweetness plays the part of a pack animal: strong enough to carry its goods, but it’s never going to gallop off on its own.