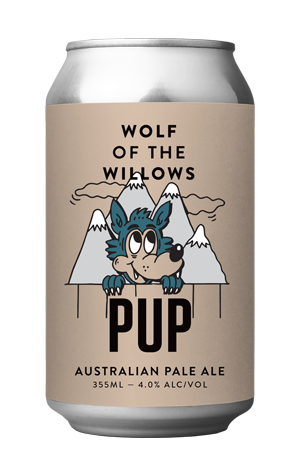 Had the past few weeks gone to plan, Wolf of the Willows would be welcoming guests to their new Mordialloc brewery venue right now. And awaiting them would have been a house beer, Wolf Pup. Given things haven't gone quite to plan – you can read about how owners Scott and Renae have been adapting here – you can now enjoy the supposedly taproom only release at home.

As the name suggests, it's a beer that's relatively small in stature: a 4 percent ABV Aussie pale ale. Built with a pale malt and wheat base, with some oats to aid body, it's an easy-going addition to the lineup with Aussie Enigma hops at its core. They add some stonefruit aromas and a little melon to the hazy golden beer, a touch of pineapple to taste, while there's a faintly resinous bitterness keeping things crisp.

Completing the nod to the taproom, the label artwork is a section of the mural that you'll be able to view when the venue opens, created by Marcus of Digable Goods.