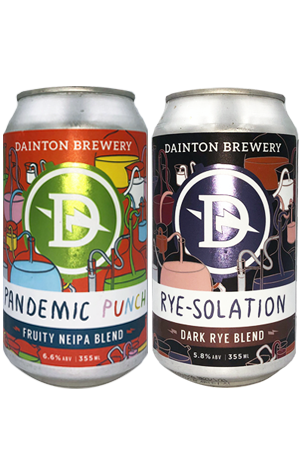 When the COVID-19 lockdown hit and venues closed their doors, breweries, bars and pubs were forced to find innovative ways to get through their kegged beer. At Dainton – as we wrote about here – they decided to blend a stack of them to create two new canned beers. One featured a variety of fruity, NEIPA styles, the other some rye-heavy drops. And now they're canned and making their way to fridges, they're not quite what I'd have expected; instead of becoming a cacophony of their constituent parts, they're rather calmer.

In the case of Pandemic Punch, it's hazy rather than producing the sort of dense fog you might have expected and is an all round softer experience too – like bubblegum without any sharp edges. The end result is one of red berries sat atop a creamy, rounded and somewhat sweet, tropical fruit punch.

As for the Rye-Solation, it pours a ruddy chestnut and is most reminiscent of an English amber ale. Predominantly malt driven – biscuity and nutty, with a little raisin and cake batter for company – the liquid in your glass isn't nearly as out there as the means by which it came to be there.