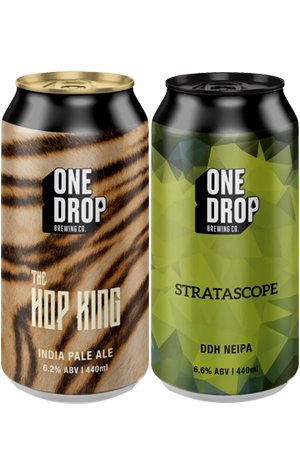 Apparently, all it took to make us all simultaneously watch a documentary about an eccentric mullet-wearing, gun-toting, tiger-owning, alleged murderer was a global pandemic. Who’d have known?

Now, what will it take to make you all simultaneously try this beer?

Right from the start, The Hop King hits you with piney notes of a classic West Coast IPA: fresh and earthy and resiny, rounded out with an edge of citrus. It’s like you’re strolling through a pine plantation, the needles thick under foot and the aroma thick in the air. Or, if you’re feeling particularly exotic, you might even imagine trudging through the crisp snow in some Scandinavian country, breathing in the scent of fir trees on the cool air. While the pine dominates, though, the flavours aren’t at all unbalanced - the combination of Cashmere, Amarillo and Mosaic makes sure of that.

Unlike a classic West Coast, however, the raw power here is restrained, like the tigers shown in the documentary (ahem, except for that one tiger that ripped someone’s arm off). The bitterness eases off, the big flavours ease off, and the beer finishes quite dry and fresh, leaving just a little toffee stickiness and a hint of pine needles in your mouth.

Like Tiger King, The Hop King is dangerously binge-able (not that we recommend you binge it) and will have you telling your mates: “Try it. Trust me. You’ll love it.”

Moving from the forest to the fruit orchard, Stratascope DDH NEIPA (or double dry-hopped New England India Pale Ale, for those few among you who prefer long form) captures everything you love in a string of initials. A thick, juicy appearance - not the opaque orange juice you sometimes see, but more like cloudy apple juice - promises much, and certainly delivers. Mandarin, mandarin peel bitterness and orange are balanced by the sweetness of pineapple and passionfruit.

The aromas of Strata are described as “passionfruit meets pot”. While I may have noticed a touch of dankness hidden among the fruit, it was certainly subtle. Perhaps since moving to the Inner West of Sydney I’ve started to tune out that smell - I don’t have to walk far in the back streets of my suburb to pass through an aromatic cloud of someone’s herbal relaxation. Maybe Strata hops have achieved what no one else has achieved before, and successfully disguised the smell of pot where thousands of others have tried and failed. Apparently the trick is mandarin, orange, pineapple and passionfruit marmalade.