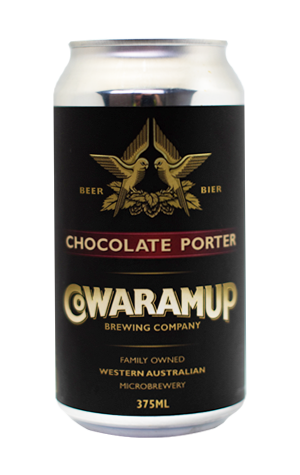 Cowaramup Brewery was established in 2006, and since that point has held a reputation for producing high quality, traditionally-minded beers to rival any brewery. Their Chocolate Porter is no exception – a beer that's steadily developed a fond following among WA craft drinkers over the last 14 years.

However, in order to get your hands on one of head brewer and founder Jeremy Good’s beers you needed to visit the brewery itself, meaning a trip a few hours south of Perth to the brewpub a short drive outside Margaret River. Until the arrival of COVID-19, that is, with a canned core range hitting shelves around WA for the first time.

Though complex in flavour, the Chocolate Porter is brewed according to German purity laws (as are all of Jeremy’s beers), with sound brewing techniques yielding rich, chocolate and roast flavours in abundance, as well as a smooth and creamy mouthfeel. Moderation in hop additions and a considered 5.7 percent ABV ensure drinkability and a clean finish.

The Cowaramup Chocolate Porter is an excellent example of the style and a lesson in restraint from one of WA’s most underrated but consistently good breweries. It comes from a place of dedication and commitment to a craft and, as an already well-respected beer in the WA market, its move into pack may elevate it to even greater heights.