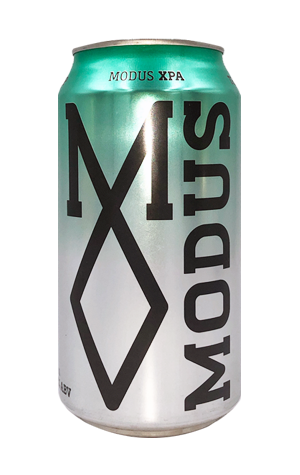 We like to make up new words in the beer industry, even if most of them are initials, acronyms, or portmanteaus. Someone made up the style XPA a few years ago (and we’re still not all agreed about what it means). Now, in keeping with this grand tradition, Modus describe their new core range XPA as "tropi-lo-cal", an adjective to capture tropical hop flavours, but also lower calories to help stave off beer belly.

First released as a keg-only beer over the summer of 2019/2020, Modus XPA has now made it into core range at a time when a tasty but lower calorie beer might be particularly appealing to people in lockdown. After all, many of us have found that our incidental exercise has dropped to almost non-existent, but our incidental beer consumption has not. During this period of life when working from home is at an all-time high - as is the temptation to wear pyjamas for 36 hours straight - this lighter, crisper beer is a clever offering from Modus.

With an almost lemony hue, Modus XPA presents its lightness right from the beginning. While Modus is known for its hop-heavy beers, this one has a slightly toned-down approach. Citrus zest aromas lead into floaty tropical notes on the tongue, but the finish cuts off cleanly, leaving nothing but a trace of bitterness.

One Modus XPA may be lower calorie… does the same hold true if you have two or three?