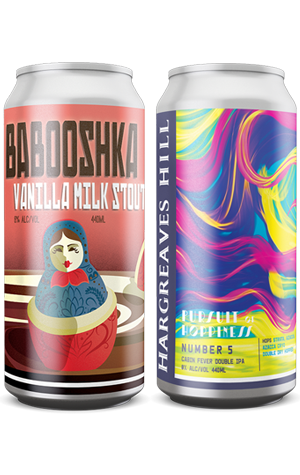 Rich and creamy or hazy and hoppy (and, in many cases, boozy too) are order of the day for many a beer nerd on the hunt for their latest fix right now. So one assumes there will be a fair few beating a path to their nearest bottlo for a taste of this autumnal double release from Hargreaves Hill.

Babooshka is making a return: initially brewed from the second runnings of their Russian Imperial Stout in 2019 she's just as wanton in her piling on of lactose and vanilla this time around. As with the first release, those adjuncts smother the dark malts at the beer's heart, leaving you with a soft, creamy mocha of a beer. Albeit with an extra dollop of cream. Just because.

Cabin Fever sees the Yarra Valley brewers return to their Pursuit of Hoppiness series, this time in the shape of a hazy, double dry-hopped double IPA, ostensibly because it's just the sort of beer they find themselves reaching for in these unusual times. Weapons of choice here are the increasingly omnipresent Strata along with Azacca in both pellet and souped-up Cryo form. It's not the haziest of hazies, but it wears its DDH and DIPA badges on its sleeve in the shape of waves of pineapple, gooseberry and grapefruit riding upon a sea of sweetly boozy dankness.