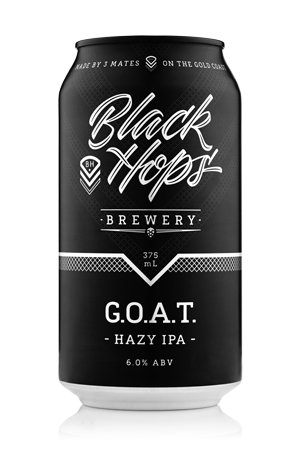 Calling a beer G.O.A.T. is a ballsy move, yet the Black Hops brewers clearly knew they were onto a good thing with their hazy IPA. The first batch took out gold at the Australian International Beer Awards; a later batch gold at The Indies. Unsurprisingly, it quickly became a fan favourite too; when people are falling for pretty much anything hazy and hoppy these days, what chance do they have when one is done really well?

And now the life of the G.O.A.T. reaches its logical conclusion: a move from regularly brewed limited release to a slot in the permanent lineup.

It's a hazy IPA that, like a growing number of local examples, hits the bullseye. The haze might be at the lower end of the spectrum but the impact is high: there's the intensity of the syrup left in the bottom of a tin of fruit pieces layered with candied oranges and ripe rockmelon aromas courtesy of the Mosaic, Amarillo and El Dorado hops. Flavour wise, you've got sweet hops-meet-malt enhanced by a palate-tweaking, fruity bitterness that wraps things up just so.