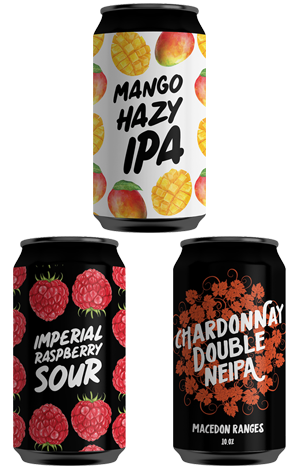 Hope are one of the quiet achievers of the beer world, largely keeping to their picturesque corner of the world while steadily putting out new releases featuring interesting styles and ingredients.

It feels strange calling this Mango Hazy IPA their least "different" new release, since it’s a style that didn’t exist a few short years ago, but such is the current fashion of the beer scene. Nevertheless, Hope’s version carries all the mango-ness you could hope for - it looks like mango nectar in the glass, thick and opaque; it reeks of fresh mango; and it tastes like you’ve just bitten into a big Bowen, leaving a little tingle on the tongue. The brewery says the mango accentuates the hops, but I’d put it the other way around - the hop flavours support the fruit. The mango is the real star of the show, with the hops playing a supporting role (and doing a great job of it). You’ll be wondering if you have juice running down your chin.

If you haven’t tried any of Hope’s imperial sours yet, now is your time. The Imperial Raspberry Sour does the series proud, pouring a deep pink with a peach blush, and sporting a fluffy light pink head. Just one whiff and you’ll be blown away by how this smells every bit like straight raspberry cordial, but let me assure you that it doesn’t taste exactly like it. (If you haven’t tasted straight raspberry cordial, did you even have a childhood?) In taste, it’s closer to raspberry kombucha, with equal parts sweet and sour, but with a smoother feel in the mouth. The rich, sweet berries and the soft sour bite fade away a few seconds after swallowing, leaving a tantalising phantom of sour on the tongue.

Of this trio, the Chardonnay Double NEIPA is the biggest standout, both in flavour and in uniqueness of style. When you’re both a winery and a brewery, you’d be crazy not to take advantage of that value proposition, so it’s a good thing the folk at Hope Estate have their heads screwed on straight and take the opportunity to play around with grapes in beer. This beer takes 20 percent chardonnay juice, sourced from Hope’s Macedon Ranges vineyard in Central Victoria, and blends it with a NEIPA.

Don’t expect big haze - that wasn’t the goal here. Rather, the aim of using a NEIPA as a base style was to minimise bitterness and maximise stonefruit character from the New England yeast. Bring these together with the subtle melon and honey richness of a chardy and you’ve got yourself an impressive drink that really does straddle wine and beer. I found the upfront aromas, and even the first sips, were close to indistinguishable from a white wine, but the more I drank, the more the complexity and sweetness of the double NEIPA came through. From then on, it almost melded into barleywine territory - sticky, boozy dried fruits, like apricots soaked in brandy.

Did I mention this beer is 10 percent ABV? You can credit the grape juice for that extra boost in alcohol. Just don’t go breathing on any open flames.

You can hear more about their imperial fruit sour series in this video.