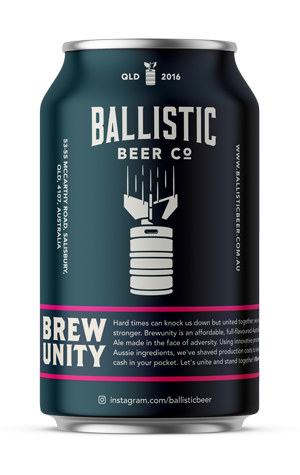 The hands of fate work with a creativity we mere mortals could never match. In 2019, brewers across Australia started playing with kveik, the fast-fermenting yeast that Norwegian homebrewers have been using for centuries. In 2020, COVID-19 threatened our economic security but by no means took away our desire for delicious beer. From these two completely unrelated phenomena, Brewunity was born.

When the novel coronavirus sent Australia into lockdown, the team at Ballistic predicted people would be in search of cheaper beer offerings that were still tasty. And so they came out with Brewunity: “an affordable, full-flavoured Australian Pale Ale made in the face of adversity,” which they sold at approximately 75 percent of the price of Ballistic’s core range pale ale. Seeing as how the first batch sold out in ten hours, it seems that Ballistic predicted correctly.

The trick to the low cost of Brewunity doesn’t involve shady secrets or reduction in quality, but the clever use of kveik. The Norwegian yeast’s rapid fermentation at warm temperatures - far warmer than standard ale or lager yeasts can handle - allowed Ballistic to save on production costs in two ways. Firstly, the beer went from brew day to canning in ten days, as opposed to over three weeks, meaning it took up valuable tank space for less time. Secondly, the warmer fermentation (with a yeast strain that thrives on it) provided fruity characters that could lift up the flavour, resulting in a lower dependence on expensive hops. And since Ballistic are big on supporting the broader industry as well as addressing their community’s needs, they made Brewunity with all Australian malt and hops.

The four percent ABV pale ale is light in body, with a smooth texture carrying the flavour across your palate. Expect a little citrus, a little peach, a little sweetness, and a lot of quaffability. Buy it by the carton, drink it with a smile on your face, and give a nod of thanks to Ballistic - and to the hands of fate.