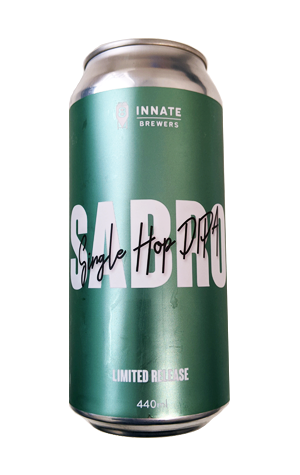 As one of two new US hops to spark particular fascination and excitement in brewers and punters alike this decade, Strata being the other, Sabro brings its neomexicanus heritage to new realms of hop expression. Given most contemporary hops have links to European noble varieties, it’s little wonder citrus, pine, grass, earth and floral notes feature through the family tree but no one expected coconut! And that lack of familiarity may be the polarising element for some with Sabro, even if there’s still citrus at play.

While some are moving away from the idea of putting new hops into existing beer styles and instead hybridising styles to accommodate the singular talents of these new hops, Innate have stayed the course with a classic double IPA. Yep, there’s coconut cream, but also perfumed lime blossom, juicy grapefruit and tangelo. The initial creaminess on the palate moves to a moreish juicy-dry-bitter interplay with a whack of bitterness to send you on your merry way.

Find it at Innate's WA stockists