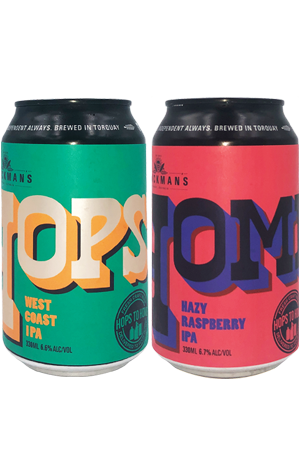 It's not particularly rare to come across brewers using essentially the same beer then changing one element – the hops, the yeast, the barrels, etc – to showcase the impact that change can have on the finished product. It's essentially what Blackman's have done here in partnership with online retailer Hops to Home although the different directions in which they've taken the base of this IPA leave them a long way apart on the beer spectrum.

Hopsie is a West Coast IPA that fires of crystalline hop aromas – sherbety, candied oranges and grapefruit, with sweet, ripe pawpaw and pine riding over the top. Leaner and more bitter than its contemporary, bright in appearance, and with some light, citrus-tinged honey malts completing the picture, it's a highly quaffable modern IPA.

Homie, on other hand, is a hazy raspberry IPA and that unlikely combo proves to be as quirky a marriage as you'd expect. It's pretty easy on the haze with the berries adding a slight blush rather than turning the liquid red, liquid that delivers a relatively sweet berry-citrus mélange with barely a hint of bitterness.