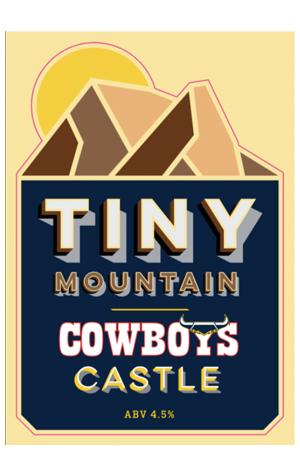 Want to make friends in Townsville? Walk into a pub and say: “Up the Cowboys!”

Cowboys Castle Kölsch is brewed for the members’ bar at the new North Queensland Stadium, which is called - you guessed it - Cowboys Castle. (Since Castle Hill is a big part of Tiny Mountain’s story, we’ll forgive the mixed metaphor of "Cowboys Castle" and just enjoy the wild west/medieval mashup.)

The brewers used the classic German Kölsch ale yeast to keep it easy-drinking, some delicate Old World hops (Hallertau Mittlefrüh) for a traditional taste, and some punchier New World American hops (Citra) to add a little zing. The brewers say this is like “pairing the finesse of a half-back with a big-hitting second-rower”. Since I know as much about Rugby League as I know about the effects of makeup on women’s health in imperial ancient Rome (only a little bit), I’ll take their word for it.

All you really need to know is that this beer is pale, light and dry - a clean beer that’s good for the heat and good for the footy.