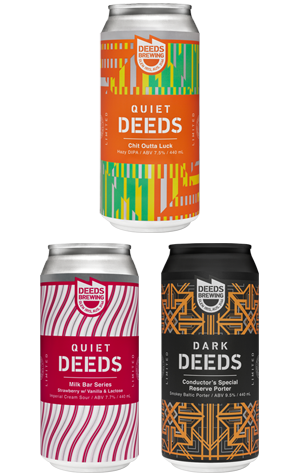 Not the sort of people to fall asleep at the wheel, the Deeds crew instead continue to put pedal to metal by dropping three new beers this week. Starting with the lightest (which still weighs in at 7.5 percent ABV), Chit Outta Luck is a hazy double IPA that might not contain the huge hopping rates of past Deeds releases - a mere 18 grams per litre - but still explores new ground for the brewery.

It does that by utilising chit malt, a type of malted barley often used for foam stability in beer but here trialled to how it works in a hazy beer. The answer is pretty well, with the beer’s soft and smooth mouthfeel providing a creamy base from which the beer’s juice bomb whack of passionfruit and mango can launch, trailing with it a little nectarine.

Next up is another instalment of the Milk Bar Series: the Strawberry with Vanilla and Lactose Sour. It’s impressive just how well the beer recreates the taste of fresh cream alongside a tart strawberry twang in a manner that had me conjuring dreams of the world’s greatest milk bar turning strawberry & cream lollies into strawberry & cream ice cream.

Finally, there’s Conductors Special Reserve Porter, a 9.5 percent ABV smoke monster of a beer that's bigger (and less of a let down) than the one in Lost. Crack the can and a hearty whiff of peaty smoke pours forth, while beneath it chocolate, toffee and coffee swirl throughout, the result of an ingredients list that packs in six different malts, coffee, lactose and vanilla.

Save 10% At Deeds' Online Store