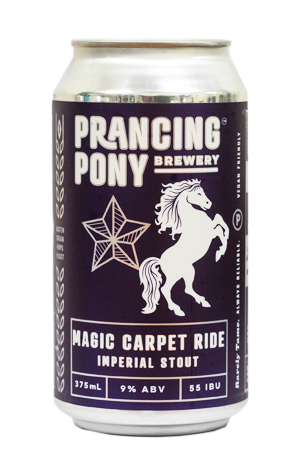 Magic Carpet Ride has been part of Prancing Pony's seasonal offering since 2015 and has made the move into cans for winter 2020. Such is the voluptuous nature of the liquid, I'm torn between whether the carpet is deep shag pile or a tightly woven rug from a North African market that would weigh about 250kg. Given it's magic, we'll go with the latter, especially as it pours with a dark plummy sheen.

Dip below the surface, past the dark chocolate and espresso aromas, and you'll find a beer that leans sweeter (albeit in a dark chocolate rather than lactose or vanilla-laden pastry sense) rather than dry. There's some sweet alcohol on the palate and a dusty, bitter cocoa that lingers, making for an offering that's warming yet approachable for an imperial stout.