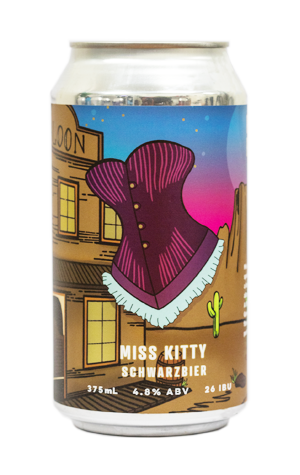 The German Schwarzbier isn't a particular common style of beer, especially among Aussie brewers. Yet it's a style that holds the record for longest reigning Champion Australian Beer at the country's biggest awards, the Australian International Beer Awards. Admittedly, that's on something of a technicality as 4 Pines' dark lager that took out the title in 2019 has yet to be knocked off its perch as there's been no 2020 awards thanks to that pesky pandemic.

Of all the other Aussie brewers you might expect to release such a beer, Prancing Pony would be up there given the owners' German heritage. For Miss Kitty, they've stayed true to type: it looks like Coca-Cola and you'll detect toasted hazelnuts passing fleetingly before chocolate aromas take hold. There's a little toasted bread crust and maybe something figgy in the mix too, plus a gently drying, lager like bitterness to aid sessionability.