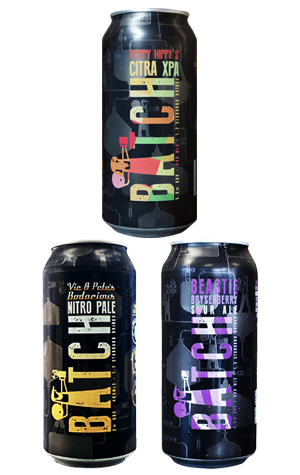 Have you ever put on a pair of headphones, closed your eyes, and listened closely to a song that pans the sound from one ear to the other? If not, it's an experience worth having - try Led Zeppelin’s Whole Lotta Love, or for a more extreme example, Foo Fighters’ Hey, Johnny Park!

The reason I bring it up is because I had the taste version of this with Batch’s Trippy Hippy Citra XPA - the flavours transition seamlessly between hops and malt. The sherbety citrus and tropical notes blend with golden-syrup-on-multigrain-toast vibes, but it's difficult to spot where one trails off and the other picks up. Bright, balanced, and beautifully rounded, with plenty of flavour kickin' around for five percent.

When it comes to using nitro in non-dark beers, Batch were early to the game, and they haven’t let up since, with their latest example being Vic & Pete’s Bodacious Nitro Pale. And, as you'd expect from a nitro pale ale, the creamy mouthfeel drives the experience, making this beer go down easier than a hot air balloon in a hailstorm. Aussie grown Cascade and Vic Secret bring a wash of floral notes and plenty of enthusiastic fruit salad flavours, like you've just eaten an entire packet of Fruit Tingles in one go.

When it comes to Beastie Boysenberry, you gotta fight for your right to tarty (shhhh, don't try to figure out what that sentence means - just appreciate my minimal knowledge of the Beastie Boys, and the rhyming of "party" and "tarty").

With a bright red body and a fluffy pink head, this beastie brew has the appearance of raspberry soda. The aroma’s a blend of sour berries and just a hint of yeasty funk. But in the mouth it takes on a more jammy character, with lactose taking the edge off the tartness and introducing some sweetness. Meanwhile, the high carbonation keeps it tingling and tap dancing across your tongue, which may not be the traditional way to dance to the Beastie Boys, but hey - who were they if not rule breakers?