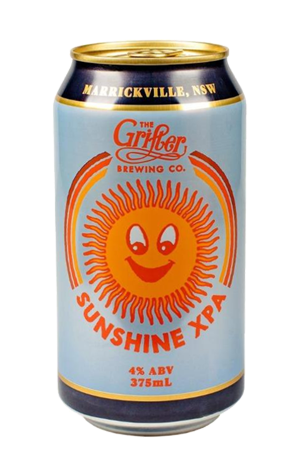 The Grifter crew have loved XPAs for a while now - they brewed their first (Southern Lord) back in 2014 when they were still gypsy brewers. Fast forward five years and Sunshine XPA came into existence as a keg-only beer at the end of 2019. Unlike Southern Lord, which by 2016 was a beefy 6 percent ABV, Sunshine XPA was a quaffable number, still looking for fruity hops for flavour, but lighter on to allow for extended sessions. After selling out and re-brewing this limited release a few times over the warmer months, the team realised people needed more Sunshine in their lives, so moved the brew into tinnies for wider consumption.

At just 4 percent, the new iteration of Sunshine XPA is as welcome as a bright sky on a winter’s day. It's an extremely chilled out beer - crisp and clean, with tropical hops covering the flavour and a nice slow bitterness on the fade out.

To give you an idea how easy-drinking it is: my drinking buddies and I spent almost a full five minutes debating about the background colour of the cans (“It’s white!” “It’s grey!” “No way, it’s silver!” “No, silver would clash with the gold! It's eggshell!” “Iridescent pearl!”) and when we looked down, all our glass were empty.

As a side note, Sunshine XPA is a friendly drink for those who have issues with gluten thanks to the use of Brewer’s Clarex. (Neither the Grifter team nor The Crafty Pint are allowed to say something is “Gluten Free” when it’s been made with ingredients that contain gluten, but when an independent lab tested Sunshine XPA and tried to find some gluten, they couldn’t.)