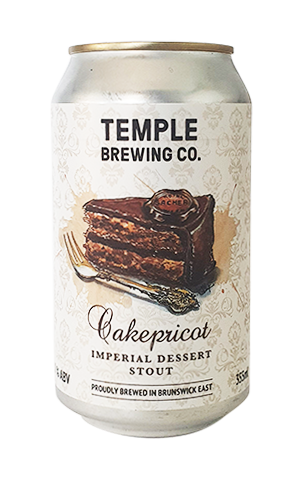 In 1832, the Austrian Empire's Chancellor, Prince Metternich, had a particularly important dinner party to organise and some guests he needed to impress. He did what you can do when you've got an empire's finances and an army of workers under your control and tasked his kitchen staff with coming up with a new cake.

But, with the head chef unwell, that task fell on a 16-year-old apprentice named Franz Sacher who set off to pound chocolate, eggs and apricot together in a manner that impressed not just those courtly guests but generations for years to come. The sachertorte was born and, though that origin story may not be true, for visitors to Vienna a slice of the chocolate cake is often seen as essential.

Visitors to Brunswick East may also like to stop into Temple to try a beery take on the cake, the imperial dessert stout Cakepricot. Originally destined for GABS, the team decided to releases it instead as a winter seasonal in cans with the feeling that if there was ever a time people deserved a piece of cake it’s right now.

Having spent my time in Vienna hunting down wiener schnitzels over cake, I’m no expert on sachertorte but I can say Cakepricot provides a rich and luscious chocolate body along with a slight warmth from the 9.2 percent of booze within. Along with the sweet apricot jam, there’s also an earthy and woody quality tied into the beer’s bitterness due to the late addition Simcoe hops. In true GABS style, it would fit well on a paddle of other big stouts, although I drank the whole can to myself and eyed off the second while excitedly scrolling through Prince Metternich’s Wikipedia page...