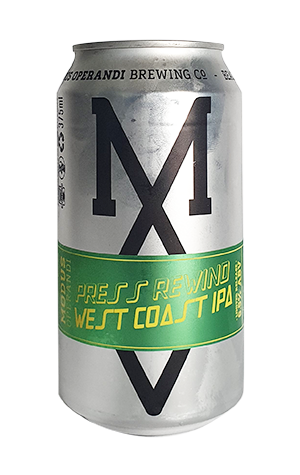 When Modus set up their hazy program, they did two things. One: they gave themselves licence to experiment further with hazy beers. Two: they gave themselves space to keep working with non-hazy beers, rather than getting entirely swept up in the haze craze. With Press Rewind, they’ve pulled away from the tropical juice flavours, negligible malt character and low bitterness of the NEIPA nebula and have landed back in West Coast IPA territory.

Not only does Press Rewind not look like brekky juice, it’s quite dark for an IPA, exhibiting a deep honey gold, almost amber hue. The aroma is thick resin crowdsurfing on toffee and caramel malts, reminding you immediately of the different elements that used to be common in IPAs. Once it’s in your mouth, this IPA sits comfortably on the tongue, letting pine, grass, earthiness and sweet Caramalt cover your palate. The earthy bitter aftertaste is approachable but by no means toothless - it’s got the power to wrestle with the grease of a burger or buffalo wings, but won’t fry your tastebuds.

If you’re a hazyboi or joosegurl, you might be surprised by the blast of malt and hit of bitterness. If you’re an old school IPA lover, you might find it doesn’t blow your face off like that first bitter beast you ever encountered. But if you enjoy a burger and a beer and bitter and sweet and all things neat, then it’s time to press rewind and take a sip that’ll take you back.