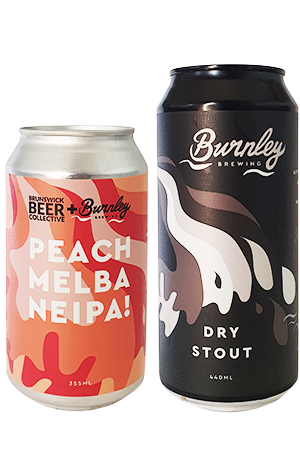 Burnley Brewing have finished off one series of beers and welcomed winter with another limited release. There’s Peach Melba NEIPA, the fourth beer in the brewery’s collaboration with the podcasters at Brunswick Beer Collective called The Pie Round: four beers inspired by four pies. Technically, it’s a little more of an ice cream sundae than a pie but, given the Peach Melba is named after Australia’s legendary soprano, it seems a fitting way to close the curtain on the series. Brewed with peach, raspberries, vanilla and lactose, those two fruits sit a little syrup-like atop a subtly ice cream-invoking base.

From adjunct-heavy to the Reinheitsgebot-approved, Dry Stout is a far more straight-down-the-line seasonal. It uses the classic English hop combination of Fuggles and East Kent Goldings in a beer that’s big on the coffee flavours, roasted barley, has a little aniseed and a slight cola edge.