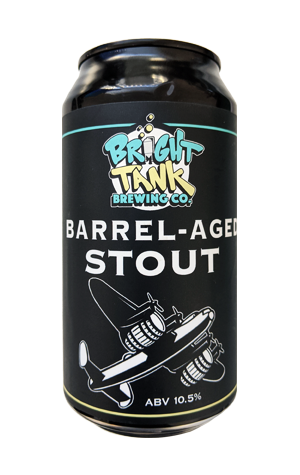 One of the unforeseen gifts of barrel-ageing is the multiple people that a beer touches throughout the process. Indeed, whisky distillers have known this for generations, with many a fine dram the result of someone's toil years prior to release; or there's the world of tequila where agave farmers tend to plants for up to 40 years before use.

For Bright Tank’s collaboration with "over the fence" neighbours Whipper Snapper Distillery, the genesis began with former head brewer Jackson Purser back in January – his last project for the brewery, in fact. New head brewer Tim Bransby and the Whipper Snapper team then tended to the resting liquid until its midwinter release.

The resultant Barrel-Aged Stout leads with a complex nose of vanilla marshmallow, Anzac biscuits, coconut, treacle, praline and dark chocolate. These open to oak, vanilla and almonds in the glass alongside fleeting soft liquorice, American whisky, dark chocolate, mocha and booze-derived spice. Savoury leanings are just cloistered by sweetness as barrel tannins grip, rendering the finish dry, which in turns lifts the bitterness to a mature assertiveness – there’s no pastry here – while it's the barrel character which lingers.

Available from the brewery and select WA stockists