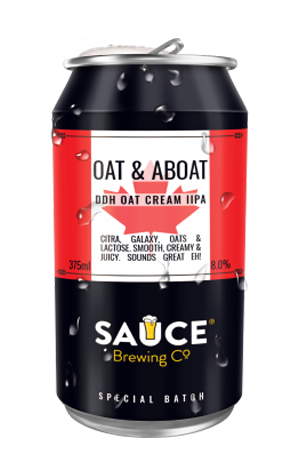 While the name and design of this beer are all about the Great White North, Sauce Brewing are up front with saying: “There's nothing Canadian about this beer - it's just that we released it on Canada Day. And if you say the name out loud, you sound a little bit Canadian.” If you’ve read many of my beer write-ups you’ll know I'm a huge fan of drawing arbitrary connections between things, so this wins points for me right off the bat (or should I say, right off the hockey stick).

Twelve months ago, oat cream IPAs didn’t really exist in the Australian market, but Oat & Aboat comes to us at a time when the style is growing in popularity. The rush of fruity hops, sweet lactose and a smooth feel in the mouth come together to make a taste experience that could never be described as subtle. Sauce’s iteration joins the ranks of oat cream IPAs double dry hopped with Citra and Galaxy hops and amped up to double IPA status.

Don’t be put off if you see some sediment suspended in the beer when you pour it - just sniff and sip and enjoy the waves of thick juiciness. Strong stonefruit and a hint of citrus mix with creamy vanilla sweetness, and yet still allow a lick of hop bitterness at the end. There’s a little alcohol warmth, but for the most part the smooth flavours make you forget this is an eight percent IIPA. Some might liken this beer to a fruity milkshake, but I reckon if you blend tinned peaches with a scoop of ice cream you’re allowed to call it a smoothie and pretend you’re being healthy.