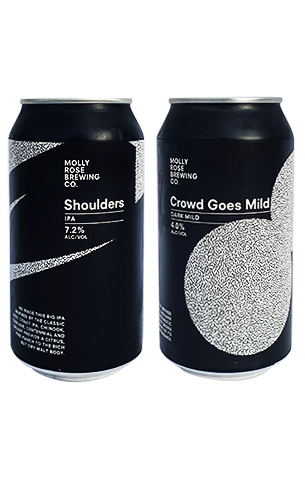 As Molly Rose’s Collingwood brewpub once again turns into a bottleshop with Melbourne into Lockdown Mk II, brewery founder Nic Sandery has two new cans ready to show off. There’s Shoulders, a slightly tweaked version of last year’s West Coast IPA Shoulders Of Giants that was designed as a showcase of the classic three Cs American hops Chinook, Cascade, Centennial. This time around there’s Galaxy in the mix too, bringing with it a punch of sherbet-like citrus, mango and passionfruit to add to the piney hit and lean body of the OG release.

Then there’s Crowd Goes Mild, a decidedly non-traditional approach to a very traditional British beer style. Pouring amber, it’s got plenty of the rich biscuity and toffee flavours you might find in an English pub offering but the dry hopping takes you across the Atlantic and back to the States by providing sizeable pine and citrus notes. The impact is to take the Crowd in the direction of a particularly restrained black IPA.