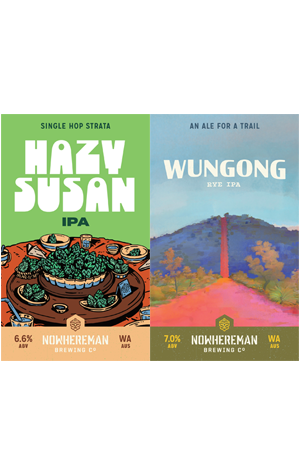 This packaged pair from Perth's Nowhereman ignore Australia’s lactose and dark malt winter addictions in favour of balanced, punchy IPAs. And, in this writer’s recent experience, it’s a sage move that's seen the hopped-up duo gleefully welcomed by those returning from the Mordor-like realms of Pastry Mountain...

"So, you mean to say these are bitter, dry and crisp? Amazing! And they are different from each other as well? More amazing!"

Hazy Susan debuted in keg in 2019 and, as the brewery’s love of Strata hops has grown, the opportunity for a re-up was too good to pass up. Strata’s berry characters lead with fruity green mango, paw paw, pineapple core and apple in the background, while there's a grassy / dusty bitterness that runs through the soft bitter finish.

Which leads us to the punchier of the pair. Named after one of head brewer Eddie Still’s favourite yet more challenging running trails - check the label for an idea of whether this looks like something you’d be doing on a Sunday morning – rye spice weaves throughout the grapefruity citrus affair, with a firm bitterness making its presence known from the off.

Available from the brewery and WA Nowhereman stockists