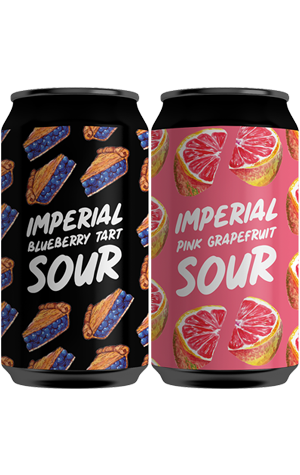 While it has the cloudy and blushed look of guava juice and cooked strawberries, the smell of the Imperial Blueberry Tart Sour is distinctly blueberry. The complex, caramelised sugar taste of stewed fruit brings to mind blueberry jam still bubbling in the pot, along with slightly more earthy notes of rhubarb. These sweet flavours are balanced by a kombucha-like potent tartness, which is enough to get you salivating.

I was surprised to find there was also the almost savoury bite of crispy pastry - though it’s also possible that may be the power of suggestion. But whether it came from the beer itself or simply the clever naming of the beer, it added a thoroughly enjoyable dimension.

The candy pink head is gone in a flash, leaving just the glowing watermelon pink body. This grapefruit is heavily sprinkled with sugar crystals, turning the citric acid into sharp sherbet. It’s the fantasy version of a pink grapefruit - something Willy Wonka would create, complete with the heady floral perfume of guava, the freshness of honeydew melon, and the dreamy bliss of double rainbows. Expect to describe it to people as "zippy" and "boppy".