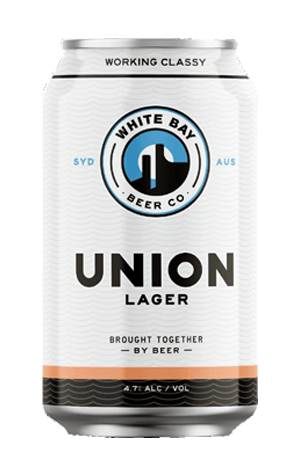 Imagine a cartoon of a beer in a glass mug with a perfect white head. (Or if you have no imagination, just Google it - I’ll never know.) White Bay’s Union Lager may match this image better than any other beer I’ve seen in real life.

Whether on tap or from the can, this beer pours with foam that sits high and tight and purest white. All at once, it looks like Santa’s beard, soft meringue, and fluffy snow freshly fallen. When complimented on his craft, head brewer Dennis de Boer simply shrugs and says: “We love foam.”

After the dazzlement subsides a little, you can expect a Euro-style lager that’s as clean as the summer sky over the harbour. With a fresh earthiness and sharp but subtle lemon zest, drinking this lager is like running your finger along a blade of grass. A soft maltiness of bread and grain accompanies the bitterness on the finish, making this the perfect drink for the end of a hard day working on the docks. (Balmain feels like it has docks. Do we still have docks? Do people still work on docks?)