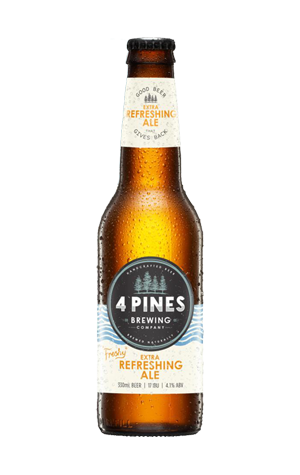 From the early days when they opened their brewpub in Manly to more recent times when they’ve opened venues up and down the east coast of Australia, 4 Pines have made beachy beers. Not that they make beachy beers exclusively, but sunshine and sea and sand and and salt are definitely in their DNA.

The most recent to be added their core range lineup fits right in - Freshy Extra Refreshing Ale. As the name suggests, it’s one for drinking, not thinking. High carbonation stimulates the palate for the crisp pear finish from the Aussie hops. It has more flavour than a lager, but is drier than most pale ales - if you take a sip and think, “Phwoar, that’s refreshing,” then it’s hit the mark.

It’s also the means by which 4 Pines are showing their love for beaches (and the environment in general) in a different way. The brewery has partnered with global movement 1% For The Planet, so that one percent of all revenue from Freshy keg and bottle sales will go to non-profit organisations that work to protect and repair the planet.