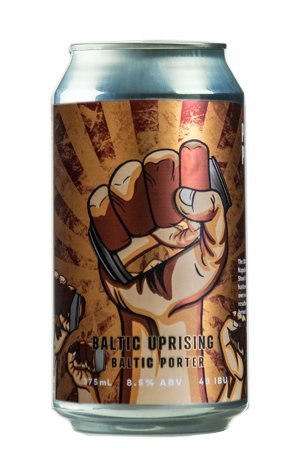 The Prancing Pony team have enjoyed their own uprising in 2020, successfully challenging the closure of cellar door operations in the Adelaide Hills during the nationwide COVID-19 shutdown to the benefit of many of their peers in the region. And now they're back with another, albeit one that shouldn't have caused as much stress along the way.

Baltic Uprising, as the name suggests, is their nod to the Baltic porters that first appeared in Eastern Europe in the 19th century; the labels even come with a wee history lesson. And, unlike many of the Aussie-brewed takes on the style we've come across over the years, which have typically been black (or at least close to) and barely distinguishable from imperial stouts, this is a shade or three lighter. Indeed, in appearance it reminds me of brown porters – a lighter style of porter dating back to the earlier days of that beer style's rise in England.

In terms of character, you'll pick up dusty cocoa, bread crust, sultanas, a little fruit cake and some coffee bean fruitiness lurking within, while the 8.5 percent ABV heft is most apparent in the mouthfeel. If anything, it feels like on this trip east from their country of birth, brewery founders Corinna and Frank couldn't resist taking a little German brewing heritage with them as Baltic Uprising has a little of the doppelbock about it too.