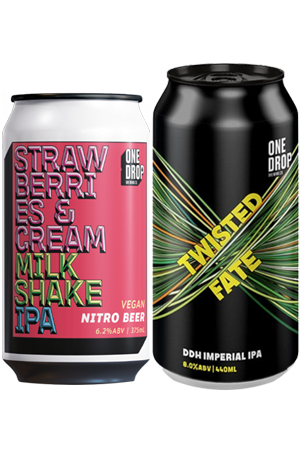 One Drop brewed Strawberries & Cream Milkshake IPA as their GABS beer for 2020 (with whatever disclaimers need to come along with that in these times), and it certainly nails the brief.

Inhale deeply and let this beer fill your nose with a perfect facsimile of the aroma of strawberries and cream (I am of course talking about the lollies, as opposed to the quaint dessert eaten by farming families in books set in the English countryside. And by hobbits). In this novelty beer, One Drop have taken an already modern style – the nitro milkshake IPA – and brought even more newness to it with their “proprietary secret lactose replacement®”, making this their first vegan milkshake IPA. It’s not quite as gooey as their previous milkshake IPAs (which contain lactose), but the secret ingredient does do a good job of hitting most of those sweet and creamy notes, so as long as the ingredient isn’t Soylent Green, we think it’s a pretty good replacement. With its lovely pink colour and nostalgic candy flavours, this is one for any sweet tooth out there.

Alongside this new-new-new beer, One Drop have released something a bit older - Twisted Fate, an IIPA that brewer Nick Calder-Scholes made from a ten-year-old recipe from his homebrewing days. Since he loved this sticky IPA so much a decade ago, he decided to simply scale it up and see how it went, ignoring newer hopping conventions and embracing the flavours of 2010.

The result is deep gold sap, the resinous syrup of a thousand pine needles. Though you can smell it long before it gets to your nose, once you stick your face into the glass it’s easy to get lost in each sniff, which brings a waft of freshness you hope will never end. The bright malt base carries the flavours – alongside the pine is an almost savoury dankness and a warm bitterness – but leaves a fairly dry finish, which isn’t always found in an eight percent beer.

Some fruit flavours start to sneak in as you keep drinking, but if I’m honest, I don’t care. There are plenty of other beers where I can get my fruit fix. I’m here for the dank.