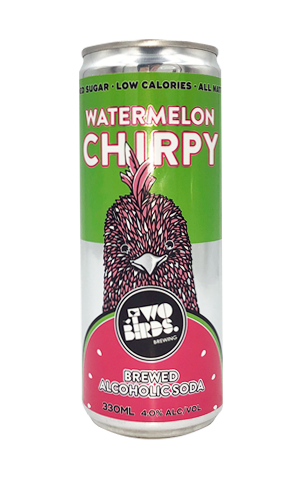 For the most part, the brewers who've decided to enter the hard seltzer market here in Australia have done so in a kind of arm's length manner, creating a new brand – Sunly, 'Ray, Tidal, Great White – to act as a home for their boozy pops. Not so Two Birds, who've joined the party with Watermelon Chirpy. Sure, she comes in the seltzer can-of-choice – taller, thinner 330ml tubes – but the branding is the same as their Brew Tang Can trio and the brewery's logo sits front and centre underneath Chirpy the bird, who appears to be channeling some sort of meerkat vibe.

They've also gone with the tag "brewed alcoholic soda" instead of hard seltzer for their debut, one that's a rosy blush colour and fires off a sweet, cordial / lolly like watermelon aroma. Thanks in part to the lively carbonation, there's a crisp finish that keeps it rather more sessionable than that first hit might have you believe.

Note: there may be other hard seltzers released by Two Birds, but we won't be writing about them. We're happy to let readers know which breweries are playing in this space, but we're a beer website and need to focus our attention on the diverse array of beers being released.