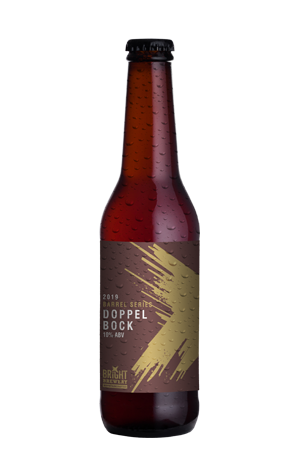 You don't see doppelbocks around very often (although we have posted a couple to the site recently); even less so barrel-aged versions. Yet there's little Bright haven't turned their hands to in the past year or two, with this release from their glitzily-labelled Barrel Series following the barleywine that dropped at the end of 2019 and which I thoroughly enjoyed and April's shiraz barrel-aged Belgian Golden Ale.

Doppelbocks, by their very nature, are of the rich, malty and sweet sort and here the Jamaican rum and Wild Turkey barrels have taken that to another level, with heaps of character from the former residents seeping into the beer over its 11 month stay. The sweet spirits take control, not only adding their rum 'n' bourbon spin to the beer but seemingly drizzling treacle through the bready, biscuity malts underneath too.