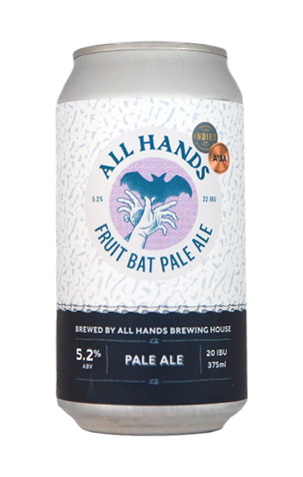 The 2019 Indies put All Hands Brewing House on many people’s radar for the first time as the brewery took out Champion Independent Brewer NSW and Champion Australian Brewpub. On the same night, they picked up a gold medal for Fruit Bat Pale Ale. The energetic core range beer has been satisfying their regulars at the brewpub for some time, and now that it’s in tinnies, it can spread joy a little further afield.

Old favourites Mosaic and Citra set a firm foundation of zesty flavour, but it’s the generous dry-hopping of Cashmere that really makes this pop. Peel open a tin of crushed pineapple and pour a glass of fizzy lemonade, and that waft of sweetness will bring you to the same place Fruit Bat does. Fortunately, though, Fruit Bat doesn’t hurt your teeth in the same way as those sugary analogues – a pleasing dryness keeps it firmly in sessionable territory, as does the lightest scraping of bitterness across the tongue.