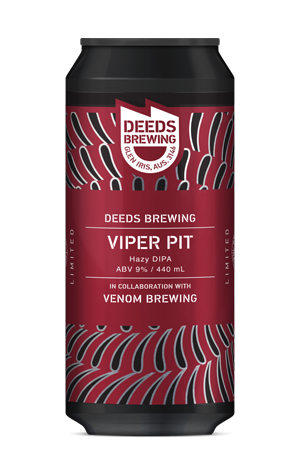 Many, many moons ago, on a family trip to visit relos in the States, I developed a taste for their powder-based lemonade drinks. I'm pretty sure the brand I picked up wasn't great for one's teeth but it was certainly good for firing one's teenage self up with an intensely sweet, citrusy hit. And, for some reason, once the Venom and Deeds collab Viper Pit was in my glass and the head had mostly dissipated, it was to those pour, shake and quaff concoctions my mind travelled, what with its pale yellow, cloudy yet not overly viscous (for its size) appearance.

What surprised me more was how the beer – a 9 percent ABV hazy double IPA they'd brewed once before – continued to foment those memories. Sure, there's a little creaminess to the lemon citrus aromas but the beer remains sweetly citrusy all the way through. Sure, there's a boozy prickle on the palate but little in the way of discernible bitterness, and the 27g per litre of Citra hops, while large for a beer, surely pales against the grams of sugar per litre in those lemonades. As for the biggest difference? Well, it's fair to say the sugar high from a glass of lemonade is rather different to that of a double IPA...

NB Venom's partners in a couple of other beer businesses, the team behind Coburg Brewing Co, have also been playing with Deeds' hop supply, creating the 10 percent ABV Son Of 3 Guns TIPA.