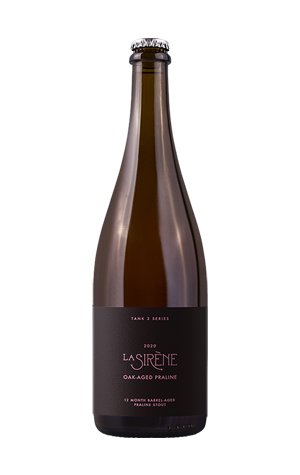 Praline is one of those beers that's steadily been creating its own little family dynasty. Not bad for a beer La Sirène's founder Costa Nikias only wanted to brew once...

A few weeks after the original recipe debuted in cans, here comes another barrel-aged variant as part of the brewery's Tank 3 limited specialty series. There's a blueberry / blackberry fruitiness riding atop the base beer's familiar aroma, which is the precursor to an acidic dark berry jam like character that, if anything, intensifies the finish. The impact of the time in oak sharpens the texture and makes BA Praline very distinct from the creamy chocolate and sweet hazelnut of the original. Sure, those elements remain, but it's as if a potent fruit jus has been drizzled through the liquid in your glass.