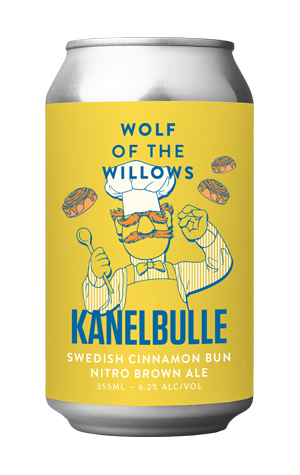 Not only have we got so many breweries releasing so many beers that even the unlikeliest of styles can land on one's doorstep twice in quick succession, we've even got beers with names that require guidance as to their proper pronunciation. Yes, just a few weeks after Two Birds released their twin Kalsarikännit beers, Wolf of the Willows tell us their latest nitro beer is to be annunciated "ka-kneel-bull-a". More importantly, however, what is it? Other than an excuse to pop the chef from The Muppets on a label.

In a fresh submission for "longest style name", we're told it's a "Swedish cinnamon bun pastry-inspired nitro brown ale", one they've created with Josefin Zernell and Kiril Shaginov of local artisanal Mörk Chocolate (another sentence that would benefit from some phonetic assistance). In doing so, said brown ale has been sprinkled with organic Ceylon cinnamon, cardamom, vanilla pods, Mörk Chocolate cacao nibs and lactose.

The result? A pastry beer you can finish without clutching your chest and hitting the speed dial button for your dentist (again). While the size of my foamy head suggests I overdid the shake and vigorous pour part, it smells like a Northern European cake stall with cinnamon and cocoa dusted sweet bread to the fore. The dry spiciness from the cinnamon is what makes it a pastry beer those turned off by the OTT, adjunct-swamped sludgefests delivered by some could get behind. Sure, it’s pillowy and there’s a nougat character to it but there’s a semblance of balance and repeatability. Unless you don't like cinnamon, of course.