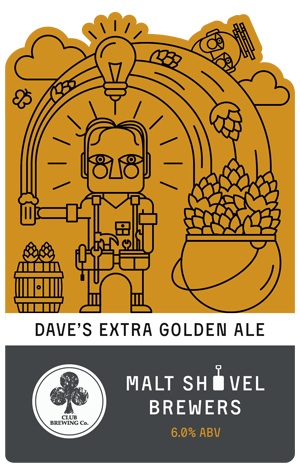 When Malt Shovel Brewers teamed up with Club Brewing Co to brew a beer, they were inspired by James Squire’s The Chancer Golden Ale - but with the malt and hops turned up a notch. The result is Dave’s Extra Golden Ale, and the name is apt - I’m not sure the gold colour could be any deeper without turning into bullion (or, you know, being described as a different colour). It’s no surprise the decal shows a pot of hops at the end of the rainbow.

The magnified malt profile brings a golden syrup flavour, and has an interesting effect on the hops. While Amarillo hops are usually known for their citrus notes, the heavy malt in this beer transforms the Amarillo from grapefruity citrus into more of a sweet melon character, sticky up front but with a crisp, fresh finish.

Club Brewing Co members have exclusive access to this beer in bottle format, but for the rest of us, it’ll be on tap in Malt Shovel venues and some other venues around Sydney.