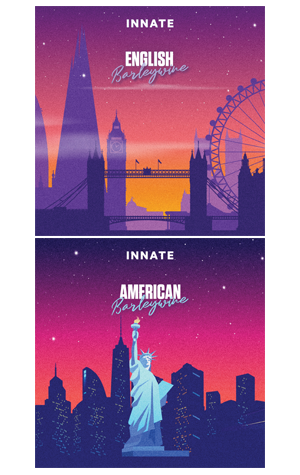 If there have been beer gifts in what's been a challenging 2020, among them are the unlikely resurgence of black IPAs with modern finesse and, in this case, barley wine, or barleywine depending on your preference. Sure, they're not exactly lawnmower beers, for those that have lawn, but in the fermented nerd arc, this "ye olde" style is kind of like the final boss you encounter before telling everyone you’re done with beer – and that a well made lager is perfection. To which any friends following your journey may well be bemused, either sticking steadfastly in their hazy, pastry, kettle-soured wonderland or wondering just what took you so long because they’ve been drinking lager all along.

Of course, you could argue Belgian styles such as lambic and gueuze are the real final bosses, but there’s a word limit here... [First I heard of it – Editor]

This Maris Otter malt-enabled duo splits itself either side of the Atlantic thanks to the use of English East Kent Goldings hops in one and American Columbus, Centennial and Amarillo hops in the other. EKG’s earthiness presents from the off in the English beer, with light herbal spice touches atop viscous caramel / toffee malt tones. Carbonation is low but persistent, befitting a luscious, and evolving, malt intonation.

As expected, the American Barleywine’s bitterness is more pronounced, but it’s not by much; Innate’s signature balance is in play here. Caramel malt appears more vibrant against the American hop-derived pine and citrus, while carbonation remains a slight, drying bead.