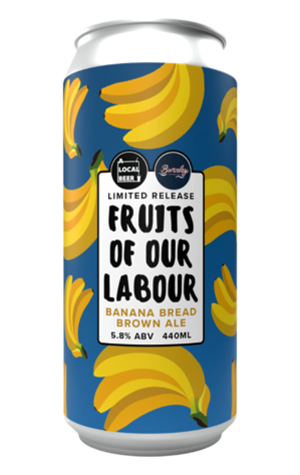 Melbourne-based A Local Beer have made it their mission to help ensure less food is wasted and more goes to people who need it, and the brewing company’s collaboration with Burnley Brewing takes that philosophy a little further. The Fruits Of Our Labour series takes food otherwise destined for landfill and creates a beer from it, and through A Local Beer’s partnership with SecondBite, each four-pack sold provides a meal to someone in need.

The first release in that series is Banana Bread Brown Ale, which seems fitting considering how often the baked treat is made to save bananas rapidly heading into overripe territory on the kitchen counter. The beer makes use of leftover sourdough from Phillippa’s Bakery in Richmond, along with bananas and vanilla extract. While the banana is particularly strong on the nose, fortunately for this banana-hating beer drinker it comes across quite lightly in the beer. Instead, like a loaf lifted fresh from the oven, the banana is mellow and meld with a light spice from the hops and the vanilla in what’s otherwise a classic English brown ale.