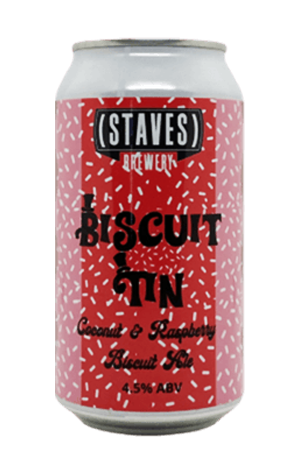 In a world where dessert beers are often thicker and sweeter than the desserts they represent(!), it’s a nice change to have something that captures the essence of a sweet treat but doesn’t give you a heart attack. While there is some lactose for sweetness, it doesn’t grab your attention; Biscuit Tin is closer to an English Mild or a brown ale than a pastry stout.

Staves aren’t subtle about what this beer is supposed to taste like. If the can design doesn’t tip you off, the description on the label explicitly states that Iced VoVos as the inspiration for the beer. Biscuity malt flavours dominates up front, with just a hint of coconut and raspberry. But as you drink, the various elements seem to cycle through: the biscuit gives way to raspberry jam, which in turn gives way to the coconut.

PS The Wikipedia entry for Iced Vovo describes it as “a wheat flour biscuit topped with two strips of pink fondant flanking a strip of raspberry jam and sprinkled with coconut”. I’m not sure why I so enjoy the word "flanking" being used in the description of a sweet biscuit, but I really do.