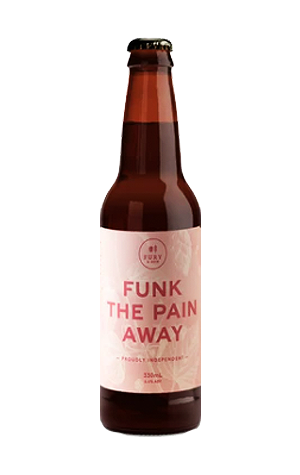 Last time we spoke to Andrew Georgiou, the son in Fury & Son, he was putting forward a stack of cartons of beer as prizes for Beer Swag Day as part of the #keepinglocalalive campaign. What he didn't mention at the time was they had also got a few beers taking shape in barrels, with Funk The Pain Away the first of a quartet over the coming months.

Like the track upon which it riffs, this is a barrel-aged sour that comes at you with the force of Peaches as she growing into a set. There's no need for second guessing at what's at play here with subtlety put to one side in favour of a face-full of sticky, sweet ripe peaches with a fruity, slightly funky Brett character layered on top. There’s some creamy oak in the mix while the vinous acidity (the barrels were ex-Chardonnay) adds a dryness to the finish, albeit not without leaving a lingering layer of those sweet, sweet peaches in a barrel-aged Brett beer that punches rather than caresses.