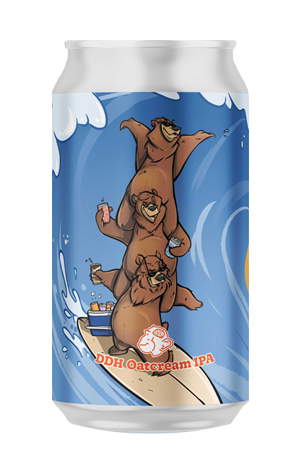 The Cheeky Monkey brewers are clearly not afraid of the haze, wholeheartedly embracing the craze with both arms in their surf break inspired series of IPAs, which now hits the turbos for turbid offering number six.

Landing at a whopping 8.7 percent ABV and and 65 IBUs, Three Bears might sound like an intimidating beer, but clever brewing yields a surprisingly balanced IPA with residual sweetness and vibrant fruit salad and citrus aromatics. A large portion of oats and wheat offers up the much-lauded haze as well as a viscosity that carries resinous, tropical hop characters well after each sip is gone.