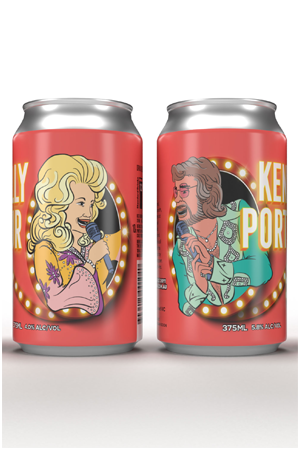 Technically, the participants in this duet from Two Birds don't rely on each other (ah ha). But, should you do with them what the brewers suggest, they will end up as one.

The Islands In The Stream pairing of Dolly and Kenny start out as two separate beers. Dolly Sour is a raspberry sour with a peachy blush hue that, thanks to the grounding, lavender musk, lacto sourness holding its own in its duet with the berries, has an aroma that's as much sour cherry as raspberries. The sweet-tartness you’d expect is more apparent on the palate, where Dolly is as cleansing and refreshing as a quick burst of 9 to 5 to kickstart your day.

When it comes to Kenny Porter, you're very much in chocolate territory - a milk chocolate torte with a dusting of cocoa, a sprinkling of hazelnuts and the odd thin slice of figs through the middle. It's as much bold English brown as porter, and when combined with Dolly (I took a gamble on evens), you'll find yourself wandering into the beginnings of pastry territory.