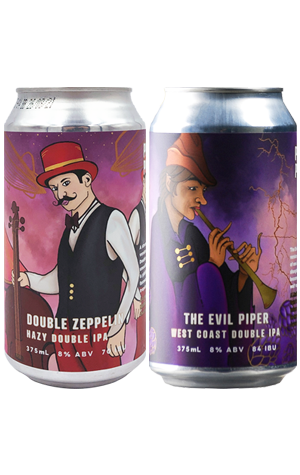 If lupulin is a cure for COVID-19 then the residents of Totness are going to be just fine thanks to their local brewer. Prancing Pony have decided to welcome spring by creating mixed four-packs featuring two of their hoppiest beers and souped up versions of those two beers.

Double Zeppelin is (no prizes for guessing, I'm afraid) a double version of their Zeppelin NEIPA. It's been around before but not in cans, and returns noticeably thicker even than the OG. It has the densely cloudy appearance of a malt syrup, and there’s plenty of cakey, nougaty sweetness to accompany the summer berry, candied orange and rosewater flecked hops. The result is a beer very low on the perceived bitterness front for one registering 70 IBUs [International Bittering Units].

The Evil Piper sees them take arguably their best beer, The Piper West Coast IPA, and ratchet it up to 8 percent ABV. And I'm much more in this camp of the two, being an old fart who was around when beers were bitter rather than the liquid equivalent of a ram raid on The Original Lolly Shop. There's a herbal, earthy, spruce character alongside the citrus rind aromas and, while there are some dark caramel malts attempting to poke their nose in, they soon give way to the other side of the hops: a potent, palate-coating, persistent and drying bitterness. All in all, a slice of the old school.