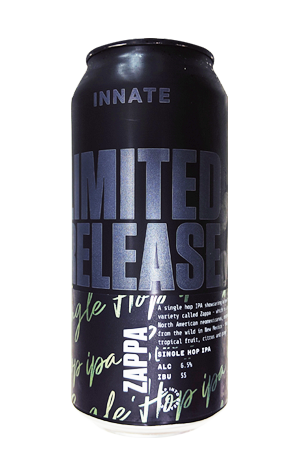 Naming proprietary rhizomes must be a challenge. Not only do you have to contend with existing names and a world of trademark lawyers, but the name also has to somehow represent the hop itself.

Originally found growing wild in the hills of New Mexico, then developed over many years, CLS Farms bestowed their newest hop release with Zappa, after rock radical Frank Zappa. It’s a bold naming choice, but one which plays out in this Innate single hop IPA with creative similarities: it’s punchy, a little spicy, a little resiny and carries a "greenness" reminiscent of NZ hops. Then there’s the commercial descriptors of "tropical" which don’t really cover what’s happening here in terms of under-ripe mango, papaya and more.

Much like its musical inspiration, Innate’s Zappa is equal parts approachable and avant-garde, an IPA which is truly unto itself.