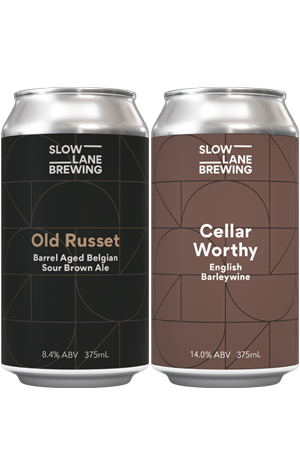 In the weeks leading up to the opening of their tasting room, Slow Lane released a quartet of specialties. You can read about the fruited spins on their Botany Weisse here and tuck into a pair of rather heftier beasts here.

Old Russet started life as a Belgian Dubbel which, honestly, would have been a joy in and of itself. But a straight up Dubbel could have been ready for release in like a month and that is simply not Slow Lane’s jam. So instead they whacked it into a barrel for six months with a few strains of Brettanomyces and pediococcus. And thus, emerging from its wooden cocoon as a beautiful sour, brown butterfly is Old Russet.

The good news is that the classic Belgian yeast character hasn’t been completely obliterated by the funk. Faint wafts of those wonderful Belgian esters are interspersed with sour caramel notes on the nose. Oaky vanilla, chocolate, raisins, coconut and even a hint of cherry reign supreme despite the vinous finish and Brett/pedio funkiness. There’s clearly a lot happening and all of it spectacular. If my praise sounds effusive, it’s because it is. This is a wonderful beer.

And finally, we come to the big daddy of the springtime foursome, the aptly named Cellar Worthy. Cellar Worthy is an English style barleywine clocking in at a positively perilous 14 percent ABV. Your average darker beer obtains colour, body and sweetness from the use of kilned or roasted malts which, due to their processing, have already developed the unfermentable sugars and other chemical compounds like melanoidins. This beer, however, relied almost entirely on taking an obscene amount of pale Maris Otter malt and boiling it for four hours. This produces an extended Maillard reaction which caramelises the pale malt and results in the toffee like flavours we all know and love without having to use a lot of specialty malts.

It took me a few minutes to pinpoint exactly what this beer reminded me of but when it hit I couldn’t shake it. To me this is like smelling a bowl full of sour Kellogg’s Raisin Bran. The massive malt body is chock full of caramel, grapes, toffee, cereal and tobacco. The sweetness is well balanced with a solid bitterness and slight alcohol heat.

It’s a very lovely beer right now but with a bit of age, OOF! What a bloody treat it’s going to be!